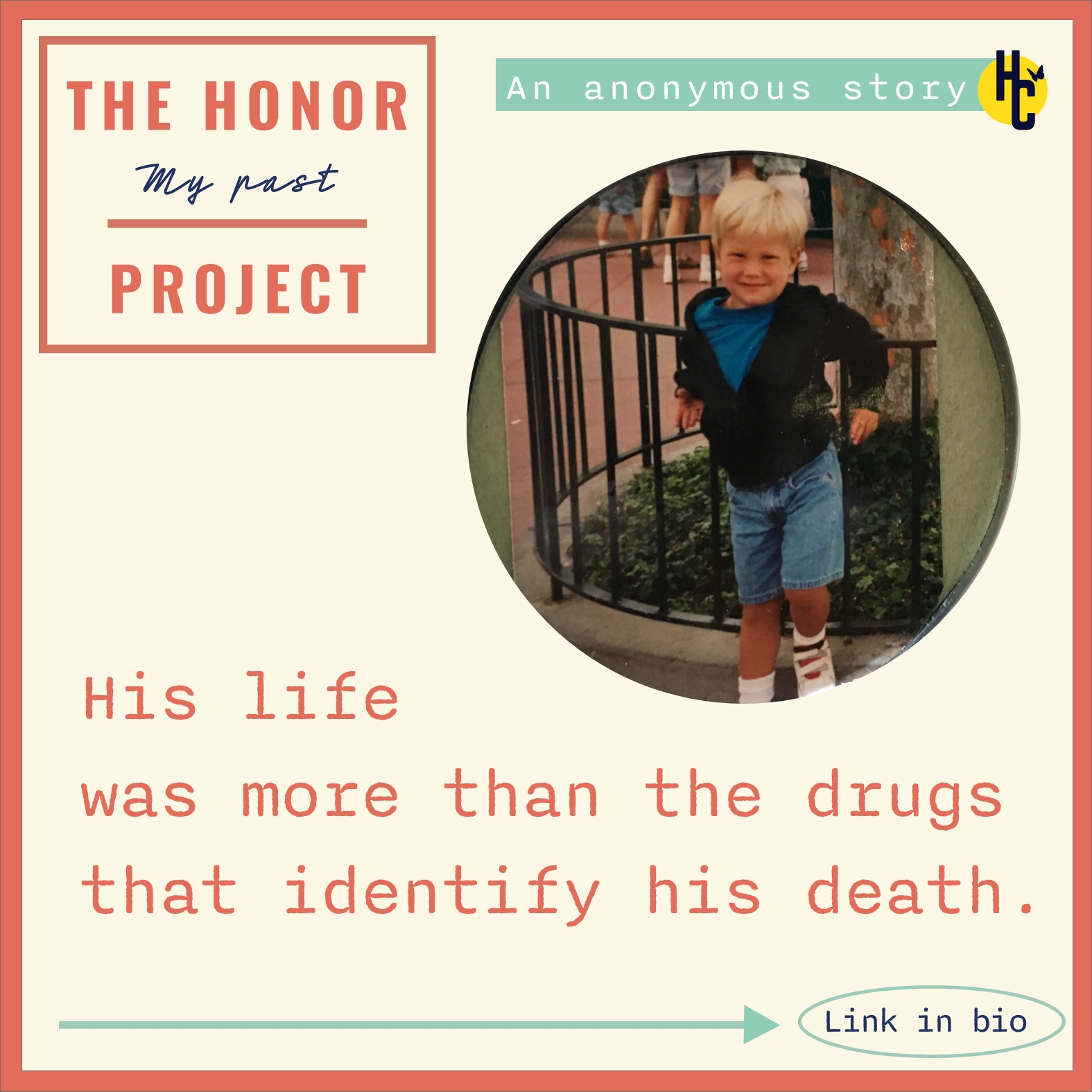 I lost my boyfriend to a drug overdose a few years ago – it still is hard for me to say that out loud to other people. It was so much more than an overdose and I hate to see the pre-judgmental expressions from those who have no idea what led to his drug use and eventual abuse of drugs. His life was more than the drugs that identify his death.

We were together for seven years and lived with each other for almost the entirety. I saw his struggle manifest slowly watched it destroy him. I tried to help him. I tried everything. But his inner battle had already begun years before he met me.

The drug use started in order to cover up the mental struggle he was internalizing. He painted a façade to the outside world with his big, bright humorous personality that only showed smiles and laughter. I always admired his ‘external’ confidence, he could handle a crowd of people feel like he was their best friend. His saying was “if they don’t like me for me then they aren’t my friend”. Not many people saw through him and understood the deeper inner conflict he was battling. It was a never-ending cycle of fear, depression, motivation, failure and self-sabotage. His family and I knew he was capable of the world but at the end of the day he didn’t. He never did. He always saw himself as less. No matter what we said to encourage and support him, he still felt like he was never enough. He fought depression harder than I think most know. It was the hardest thing watching him begin to get motivated, try to raise himself up, be good for a little bit, then slowly crash back down to what he knew best and what could ultimately provide the most comfort – drugs. It was too hard for him to come clean about his struggles to himself and to others. He started to believe his own denials and avoided any long-term accountability to help who matters the most – himself. He always fell back into the easier choice, the one that made him feel better faster… even for just minute.

There became a point where I couldn’t ride the rollercoaster of his emotional and mental destruction. I was living a life that depended on what state he was in – motivated? Depressed? High on drugs? Everything revolved around his cycle of addiction. I decided, after years of trying and failing, that letting go of him would be the best thing for him. He needed to reach rock bottom and that included losing me. So, I left him, and I thought I was doing the right thing. I thought he would get help. But once I left his void of self-worthlessness only grew deeper. He didn’t have the stability or support to direct him on a positive path. He already had become a master of deception with his own family and friends. I was the only one who knew what signs to look for when he was on the brink of self-destruction. I abandoned him when he was the most vulnerable. I still struggle with that every day – the guilt is unexplainable. I’ve been told that I was the only thing that kept him alive throughout the years we were together. It makes the guilt feel stronger, knowing I could’ve stayed, and he just might be alive today. But it’s a double-edged sword because I would’ve stayed at what sacrifice? My own life? I had to start to put me first for the first time in years – for my own well-being. When you’re in a relationship with an addict you stop to live for yourself, you live everyday thinking about what will trigger them or what they are doing – will they be safe? What are they hiding?

After I left, he was in denial, he still thought he would be able to hide away from his inner demons. He hit rock bottom. But I wasn’t there to pick him up. He kept me at a distance not wanting me to know how bad it had gotten. After almost a year of being apart, his family finally realized he needed help that went beyond what they could offer. I was so relieved. Finally, they are seeing what I saw. We had a plan. He was so close to making it. The night before he was going to make the first step towards recovery, he decided to go on one last bender and that was the one that ultimately would take his life. Instead of moving his stuff out of his apartment – he was moving out in a body bag. I know he was thinking just one last time then I’ll stop. Then I’ll get better. Then it will all feel okay. But that didn’t happen. The drugs won the war. Two weeks later I was holding his ashes, putting him to rest when it wasn’t his time.

He deserved so much more than a premature death. Mental health and addiction are tied together in a way that needs to make us look at the bigger picture. There has to be another alternative for those struggling with depression, anxiety, etc. that doesn’t lead them down a path of substance abuse. I know if there was an outlet for him to talk about his struggles with others, he would have been so grateful. He would have understood he wasn’t alone in his battle. He would have learned and felt better about himself. Because he wasn’t ever alone. None of us are alone in this. The support from those who have spread awareness around the need to talk about the hard, raw emotions that so many of us struggle with – it’s the first step in a direction that I will continue to make steps in – for him, his family, me, my family and for everyone out there that needs it.

We invite and encourage everyone from all walks of life to share their stories and experiences with mental health, addiction and suicide. The more we talk about it, the more we realize we are not alone on our journeys. This is just one way to hold onto hope.